The first CTD rosette deployment of Expedition A20

In 2021 embarking on an oceanographic voyage has unique challenges. Before joining the ship, everyone underwent a 14-day pre-boarding isolation and received two negative COVID-19 tests. No one was cleared to board until test results were received. Many self-isolated in the Falmouth area. Others lived close enough and were able to isolate at home. For the Florida contingent, the R/V Thompson stopped in Port Everglades at the end of the prior cruise, and they were allowed to board there. That permitted them to isolate at home and avoid the risks of air travel but added an extra 5 days to their journey. The four-day mobilization began on March 12th. Once on board the ship one could not leave so everyone left isolation and moved straight onboard. Without the usual evening escape for dinner or drinks we gathered each evening on the dock to socialize at a safe distance. All equipment arrived except for the UVP (underwater vision profiler) which got held up in customs. Unfortunately, we were unable to wait for it and instead it will be sent to St. Thomas to join the ship for A22.

The R/V Thomas G. Thompson departed the Woods Hole Oceanographic Institution docks at 13:38 on 16 March 2021. The ship followed the R/V Armstrong as they headed out on their next voyage. The air was brisk, but the seas were calm. About a day after departure, we conducted a test cast just outside of the Canadian EEZ. Shortly before starting the test station a whale passed by causing preparations to pause. With a boat full of chemists and physicists, the species of whale is still debated. The CTD rosette was successfully deployed amidst the usual chaos of new people learning the ropes and old hands trying to remember them. Only a few minor, and easily fixable, issues were discovered.

Departing the test station slightly ahead of schedule we knew our luck was not to last. Word quickly spread to start taking your seasickness medication. Winds began to build along with the seas during the two-day transit to the first station. By the time we arrived at the first station around midnight on March 19th, the winds were up to 25 kts and the swell was already too intense. We knew we were going to have to wait out the storm. The winds and swell continued to build over the next day, as we waited, many nauseous, but anxious to get started. The rocking of the ship left many light on sleep. Peak sustained winds reached 35 kts and swells of 15 ft. With wind and swell in opposing directions deployment was not possible. The storm passed quickly, but the swell took a while to die down, so we continued to wait, checking every few hours to see if it was safe to deploy. Finally, after a full 24 hours since arriving on station we were given word that we could send in the CTD. At only 100m, the cast was quick and the timing near the shift switchover packed the computer room with everyone anxious to finally get started. The times of sitting around talking, reading, watching movies, and playing games quickly ended as we immediately transitioned to our shallow stations. During the first 24 hours an incredible 8 casts were deployed.

During station 9 a communication issue caused the bottles to stop firing on the last 100 meters of the cast. Our expert CTD team was able to track down the poor connection within a few hours and get the package back in the water quickly. We are now on our final few closely spaced stations on the continental slope before turning due south on the 52˚ 20’ W line. 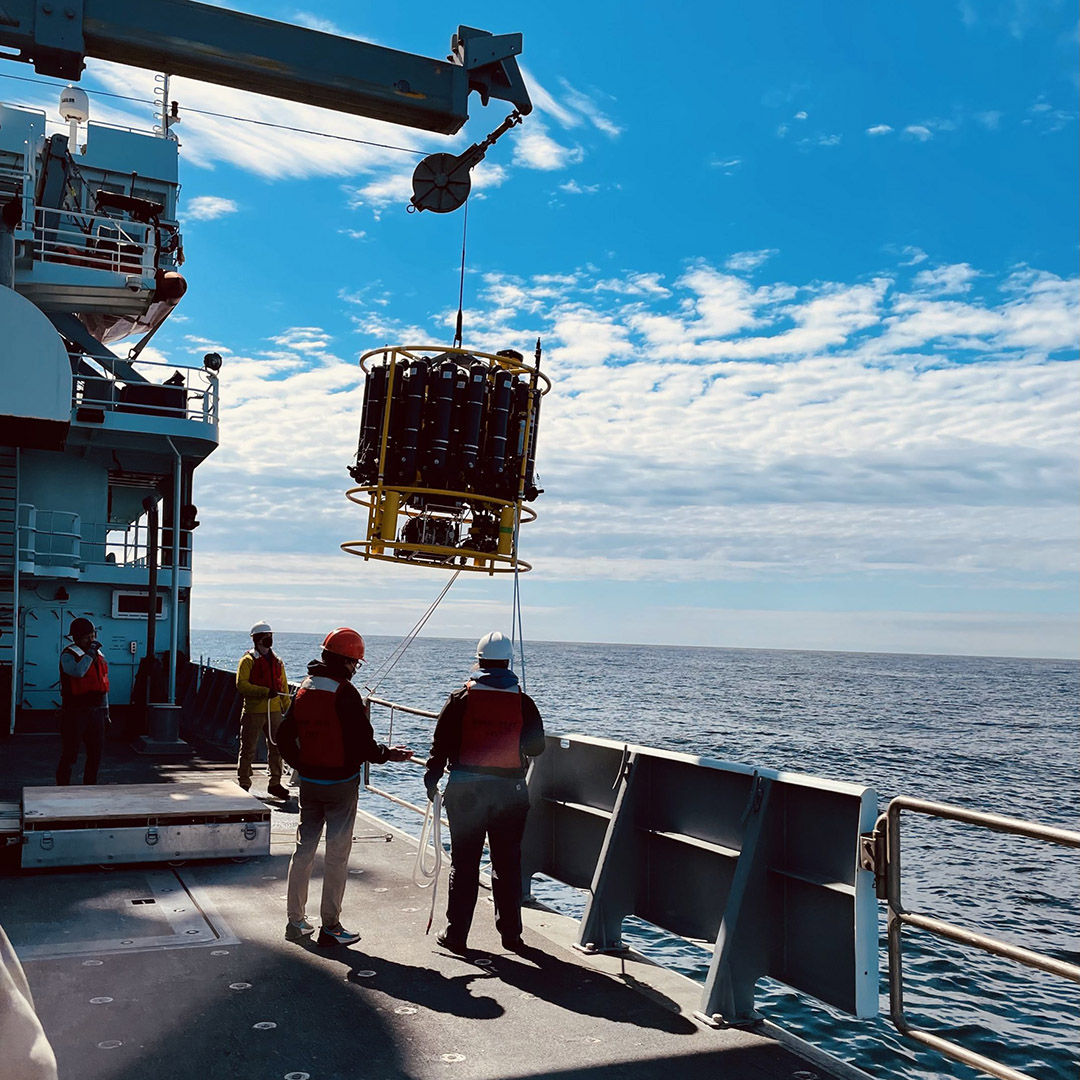 The first CTD rosette deployment of Expedition A20! Photo by Andreas Thurnherr

The R/V Thomas Thompson leaves dock at WHOI alongside the R/V Armstrong. Photo by Ryan Woosley