A22 Expedition leg is underway
;

Although this is our first week at sea, for many of us (12 scientists and 8 crew members), A22 started well before. On the weekend of April 3-4, we traveled to beautiful and sunny St. Thomas, U.S. Virgin Islands to complete a mandatory two-week, self-isolation period. During pandemic times, self-isolation and multiple COVID testing are required prior to boarding research cruises to make sure COVID doesn’t board with us. Before traveling to St. Thomas, we had our first COVID test. Fortunately, everyone was clear to travel. Some of us had to take two tests because the first results were not ready in time– labs were busy because of Easter (also bringing packed airports).

Getting from St. Thomas’ airport to our Airbnbs and stocking up on groceries was a high-risk operation in terms of COVID. The small airport was overcrowded and only shared taxis were available. Driving a rental car would also have been complicated between arranging the car return, driving on the eft, and navigating around the island which does not use numeric addresses. There was no solution other than to take a van taxi with other people to get to our accommodations and go shopping. This made most of us very scared. But, despite the the difficulties, we were able to one way or another get groceries for the entire two weeks. Many thanks are due to Meegan Corcoran (UW) and Tomomi Ushii (Scripps), who made our operation on the island possible.

During the two weeks of isolation, the science party on St. Thomas had virtual meetings almost every day, despite occasional power and internet outrages. In these meetings, we learned more about each other and the work we are currently doing. None of the students had sailed before, so some days were reserved for training and getting everyone ready for the cruise. The students were still doing course work while in isolation, so they had a busy time, but had a break on the weekends and Wednesdays.

Wednesdays were the only days we were allowed to go off our properties to take a COVID test. These were indeed happy days. We could talk in person (keeping our distance and wearing masks) with our fellow shipmates while waiting for the swabbing. Because taxis are shared on the island, Meegan arranged vans to bring us from our places to the lab, and we were also able to meet in person some members of the R/V Thompson crew. It was the only time we could grasp a bit of the island’s life. All our COVID tests had to be shipped to Seattle for analysis since the lab in St. Thomas couldn’t provide the kind of test required. In the end, the colossal operation worked well, except for one sample tube that broke during transit after the last test and had to be redone. During isolation, our temperature was also monitored– we measured it twice a day and recorded it online. Temperature monitoring continues at sea, but now once a day.

By the end of the isolation, it was brought to our attention that one of our CTD watch-standers broke the isolation protocol. Unfortunately, we had to make a hard decision to cut the watch-stander from the cruise. We couldn’t risk bringing COVID on board. Some last-minute changes were done to balance the workload and berthing arrangements, but it should not impact our scientific activities.

Finally, after two weeks of isolation and three (or four COVID tests), we were ready. Half of the science party embarked on Sunday, April 18, and the other half on Monday, April 19. But, before we could board, there was a last (rapid) COVID test on the pier. Cleared, we finally met the 14 members of A20 that were already aboard R/V Thompson and are now part of A22. Graciously some of the A20 people stayed on until Monday, April 19, to train new members of A22 . It was so lovely to meet people again.

On Monday, we had a surprise offer to receive a shot of the COVID vaccine for all that had not been vaccinated yet. At 1pm, many of us took our first vaccine shot. That day ended with a pizza dinner outside, on the deck. It was a very lively dinner, a lot of talking and things sound so normal after the heavy last year. By dinner time, all last-minute problems had been solved: The R/V Thompson engineers worked hard during the weekend to fix the backup generator problem (many thanks to them), the UVP (which didn’t make it in time for A20) arrived and was installed on the rosette, the backup D2 CTD also arrived and is waiting to be swapped halfway thru the cruise, and the CFC instrument which replaces the one that broke after the end of A20, also came and passed tests.

With our morale skyrocketing, we were ready to work. All with masks! 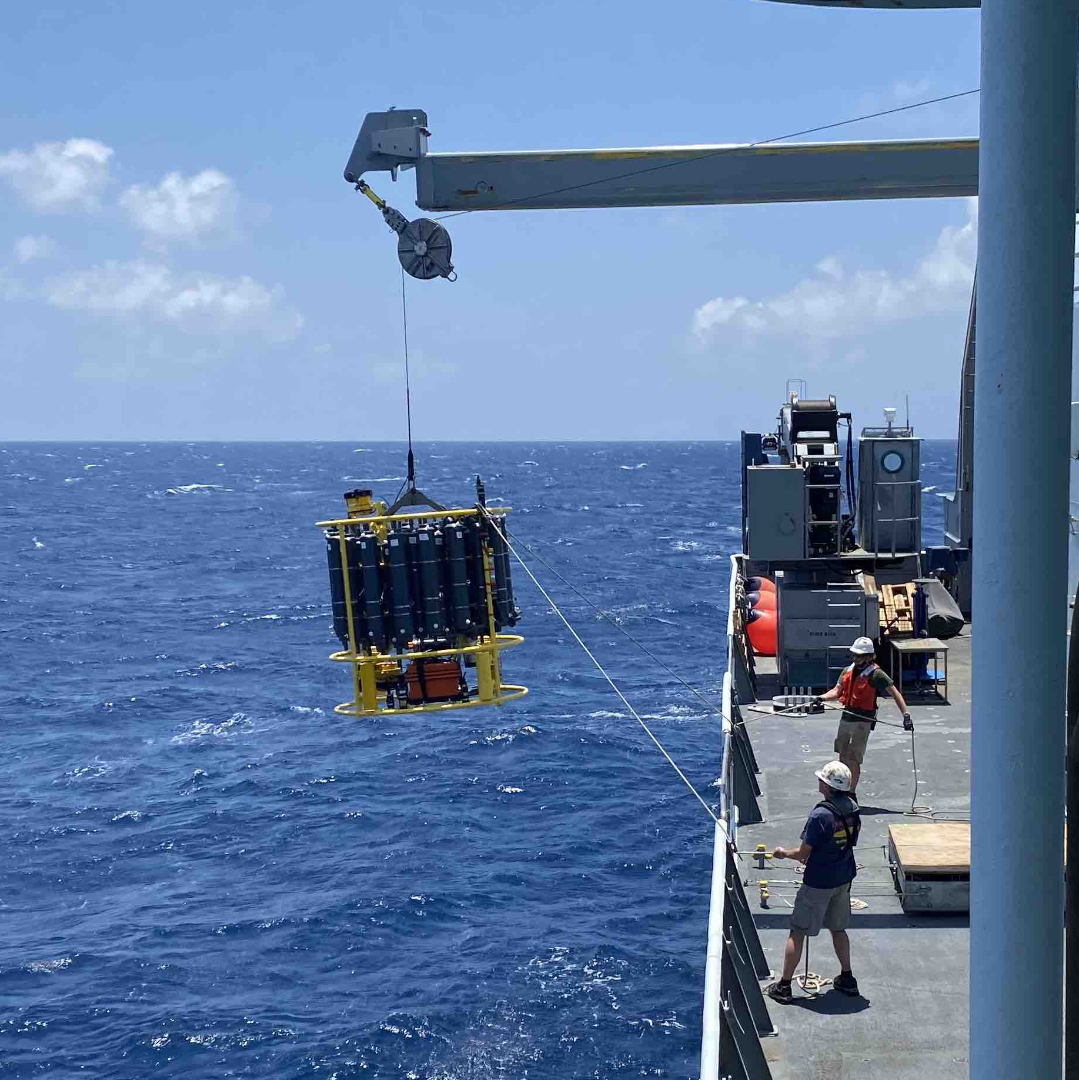 The R/V Thompson departed from St. Thomas, US Virgin Island on April 20, 08:00 AST as planned. Since then we have been working without stop, in an eternal loop: deploy-recover-sample-deploy. Unlike other GO-SHIP cruises, transit to the first station near South America was short (about 1.5 days).

While transit, early on April 21, we deployed the first Core Argo float. At noon, we did a test station in international waters (4700 m deep) to train the CTD watch-standers and incoming lab technicians. The first cast had to be aborted as a cap was not removed. The package was redeployed after bringing it back to the deck to remove the cap. Later, it was determined that the UVP did not restart on the redeployment, but the decision was made to continue with the cast. Since then, the UVP has been working well and returning some nice photos.

During the test station, the CTD watch-standers learned how to prepare the rosette, fill in the logs, make a bottom approach, and fire the bottles. It was a slow cast as everybody was learning, and mistakes were being corrected. We fired all 36 bottles, giving the CTD watch-standers as much experience as possible before beginning the first part of the A22 line where stations are close together (< 10 nm in the Caribbean Current).

We arrived at the first station at the end of April 21. Throughout the next 24-hours, an incredible 7 stations were occupied, leaving everybody exhausted but at the same time happy. The next day, we slowed down a bit to better pace the time between stations from 2h to 2.5h in order to give more time for equipment charging and lab analysis.

Best from the Caribbean,