Introducing Carol Gonzalez, one of the CFC analysts, reporting on the different types of wildlife that we saw on our trip!

While most of us (with some exceptions) on board the RV Roger Revelle do not study marine biology, in this setting, sightings of marine life are something all of us, science and crew alike, is able to enjoy. A first for GO-SHIP, on this cruise we have a group studying plankton pigments and comparing field data to satellite estimates, but macro-marine life is not investigated for the GO-SHIP expeditions. Nonetheless, as lovers of all things marine, everyone on board is constantly on lookout for any encounters with marine life. Multiple encounters have occurred thus far and as a future marine ecologist, I’m excited to share them with you.

While still on port in Guam, turtles were spotted swimming near the oil barrier, eating algae that had grown along the surface of the plastic barrier (known as a “liner”). Bioluminescence has been a common sighting and can be found at night near the bow while the ship is steaming, as it is induced by physical agitation. Squid have also been commonly spotted at night when on station (i.e. not moving), congregating near the lights of the ship (Image 1). Boobies, petrels, and other birds can be found daily on the bow, near the aft end of the ship, or off in the distance. Nick Benz, our computer tech, and Dana Greeley, who measures inorganic carbon, are avid bird watchers and are constantly working to identify new birds spotted (Image 2). Flying fish have become a common sighting as well. Easily confused for small birds, they jump out and soar right above the water for up to 45 seconds. I even awoke one morning to find one had made it onto the bow! Pilot whales have been spotted on multiple occasions as well, off in the distance. I happened to be walking by and sampling both times and it truly was a magical experience to see. After pulling out what looked like a plastic laundry hamper from the open waters one day, our Research Tech (aka ResTech), Josh, discovered multiple small crabs had inhabited the container (Image 3). They were so small and very enjoyable to watch, it’s a wonder how we got so lucky. 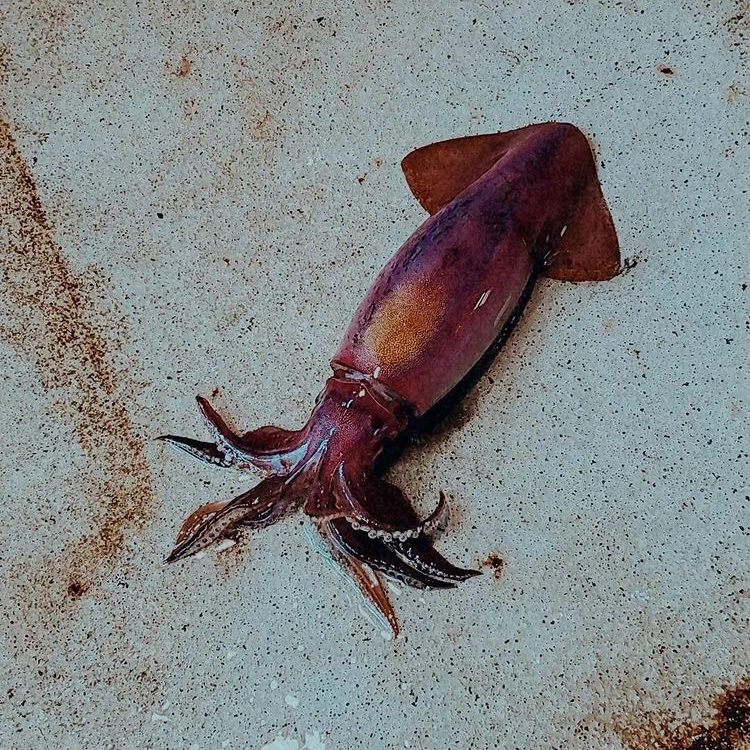 Image 1: Squid made it on deck, Photo by Vic Dina 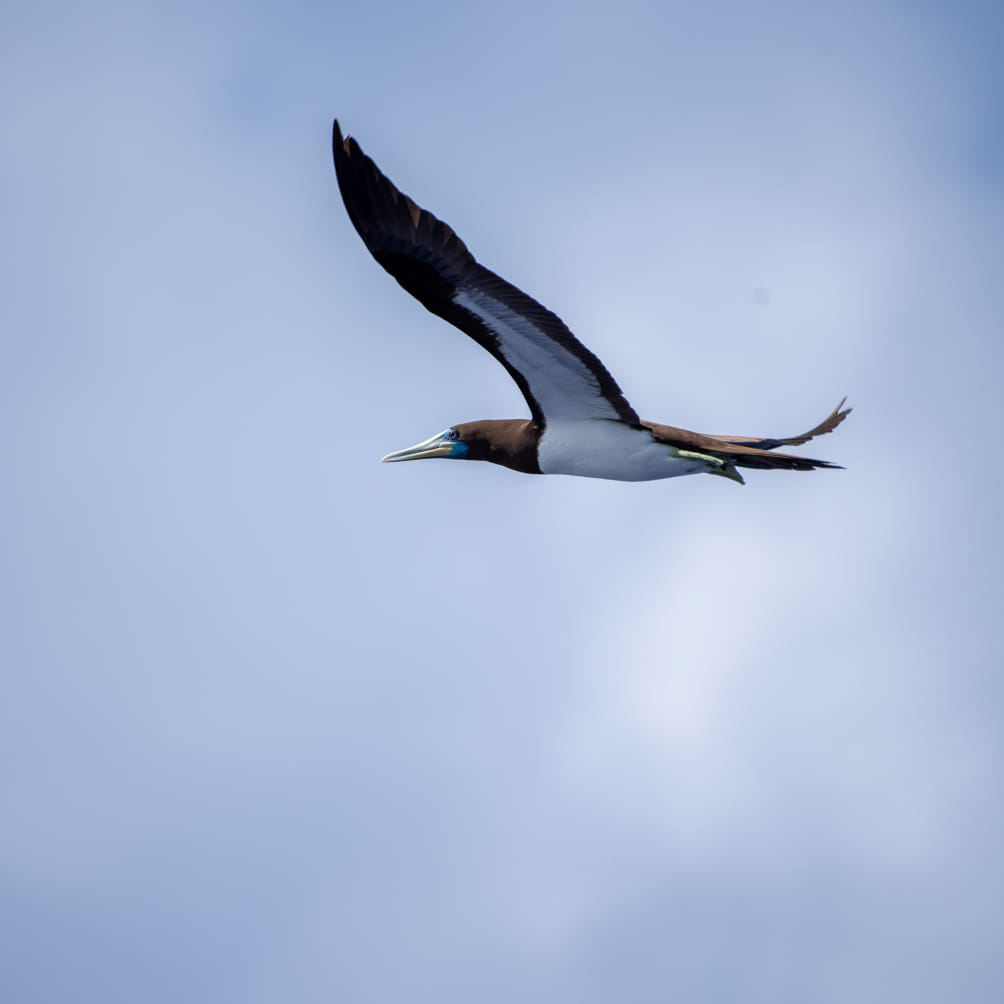 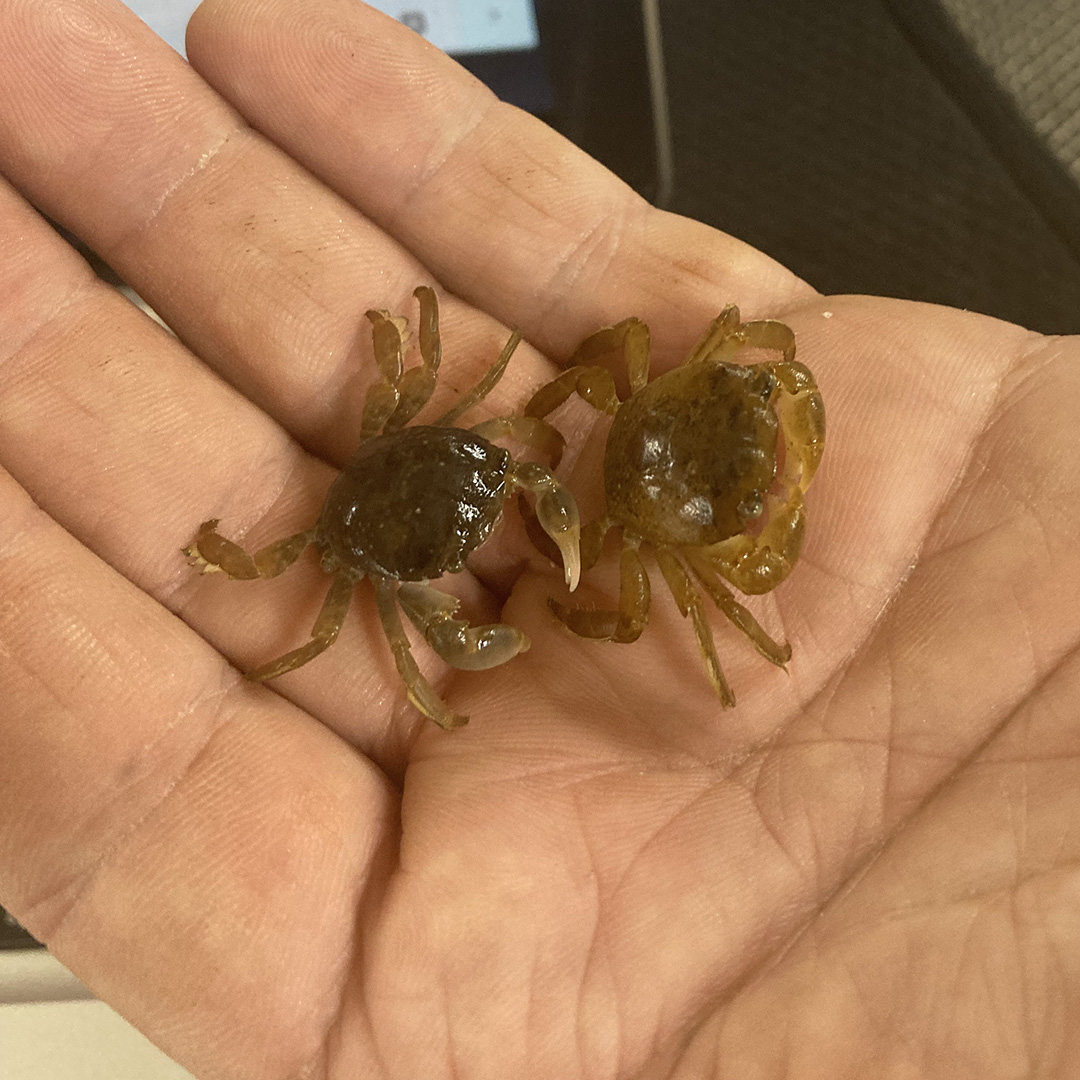 Schools of mahi-mahi were found swimming near the aft of the ship as we were stopped for station one afternoon. Their bright colors made them easily visible in the water, but unfortunately also were signs of stress. Multiple crew members pulled out their fishing equipment in an attempt to catch one, and after some time, Jeff, one of our oilers, was able to reel one in (Image 4). Upon pulling it up and humanely killing it, the vivid colors disappeared. Quickly placed on ice, it was served with dinner the following night, and made for a delicious meal and very fun experience. 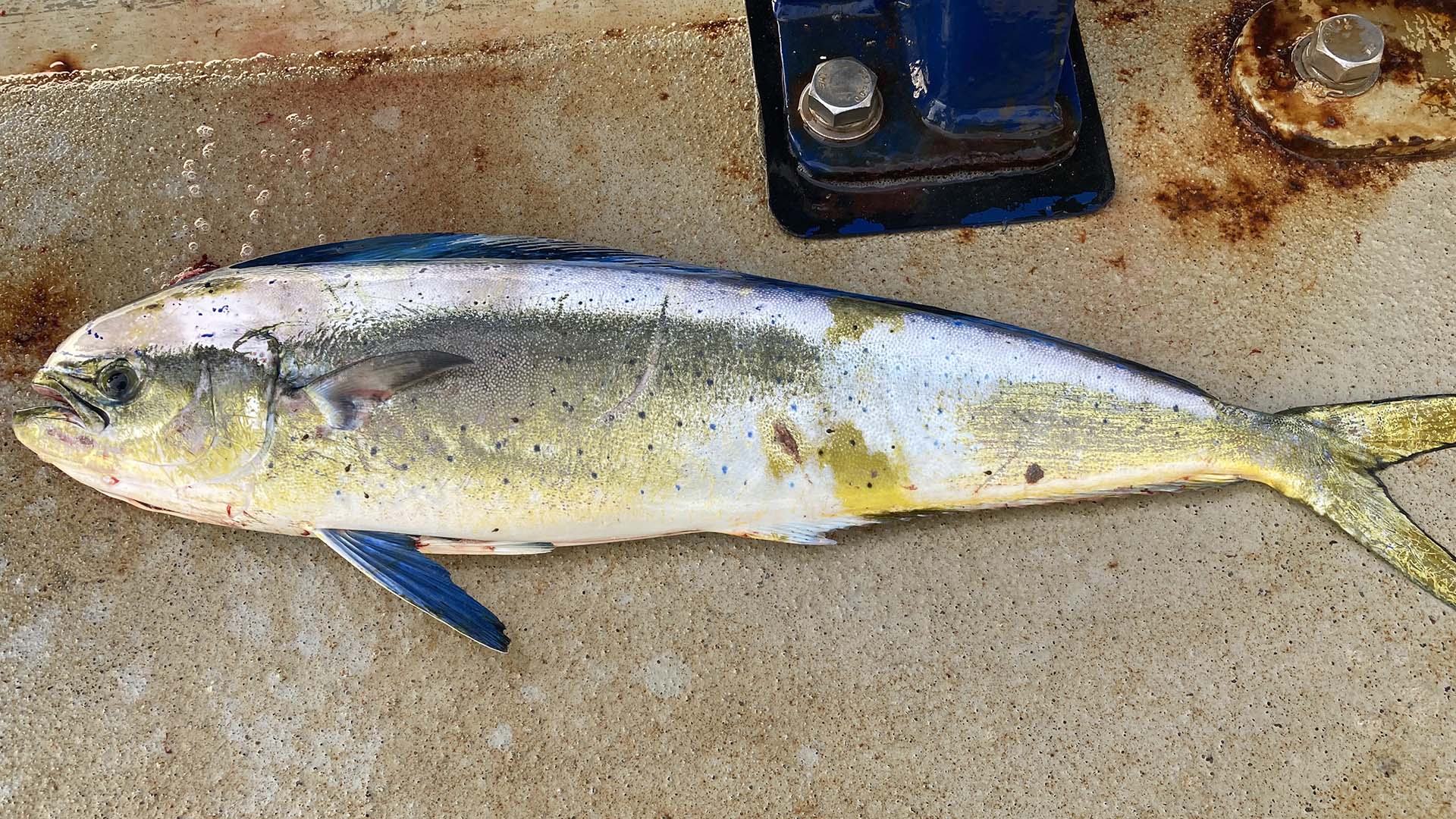 One morning prior to sampling, Royhon, another of our ResTechs, was fishing out back and successfully caught a yellowtail tuna. Very excited, we all lingered outside and waited to spot a school of tuna. Not long after, we spotted a couple sharks swimming near the boat. Beyond excited, we quickly awoke our resident shark biologist, Abby, and with the help of Josh, we learned that we had spotted a male white tip shark (Image 5). This was truly a surreal experience to see. Ship morale was exponentially boosted after this encounter and the tuna was served as sushi the following dinner. 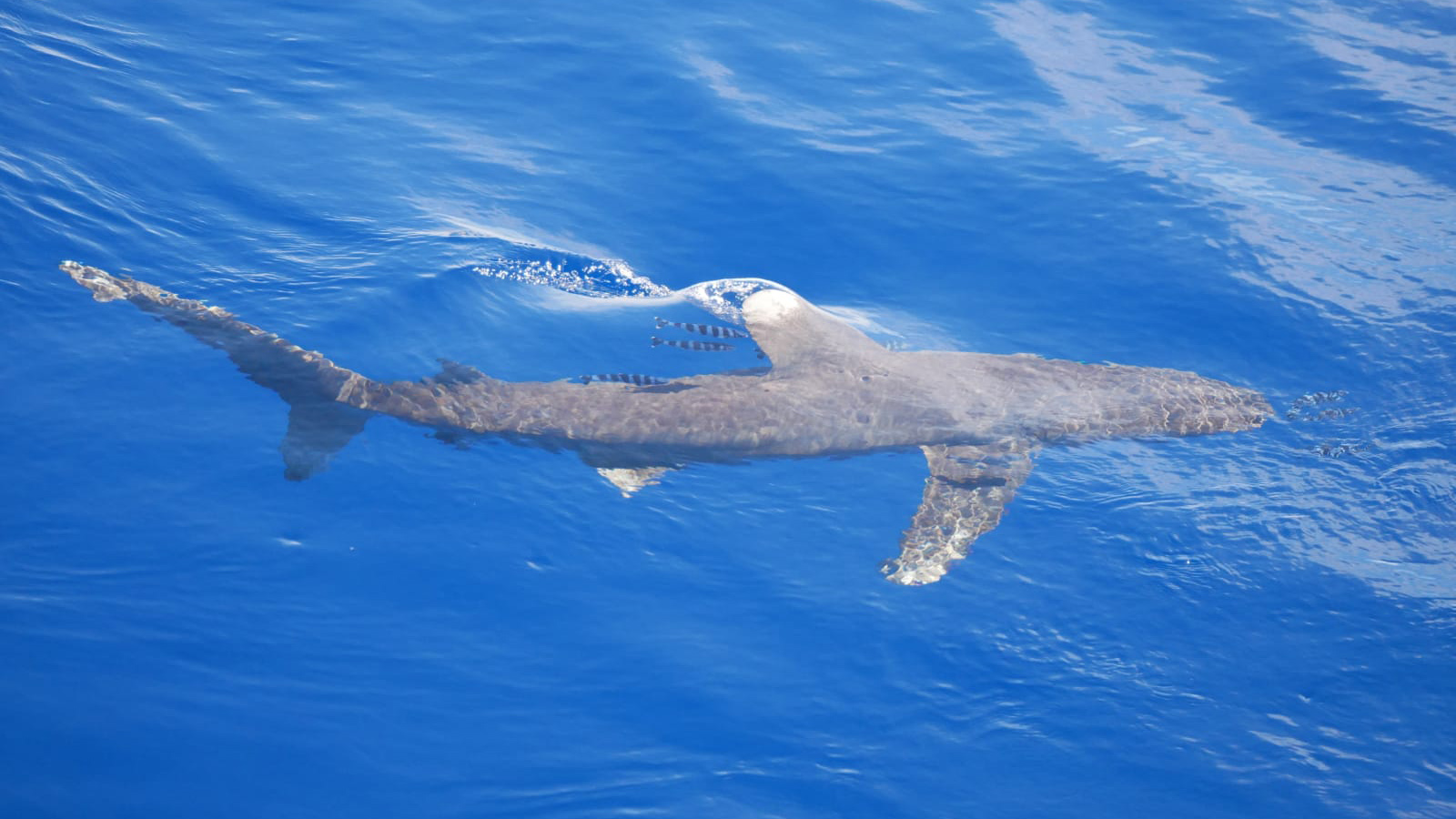 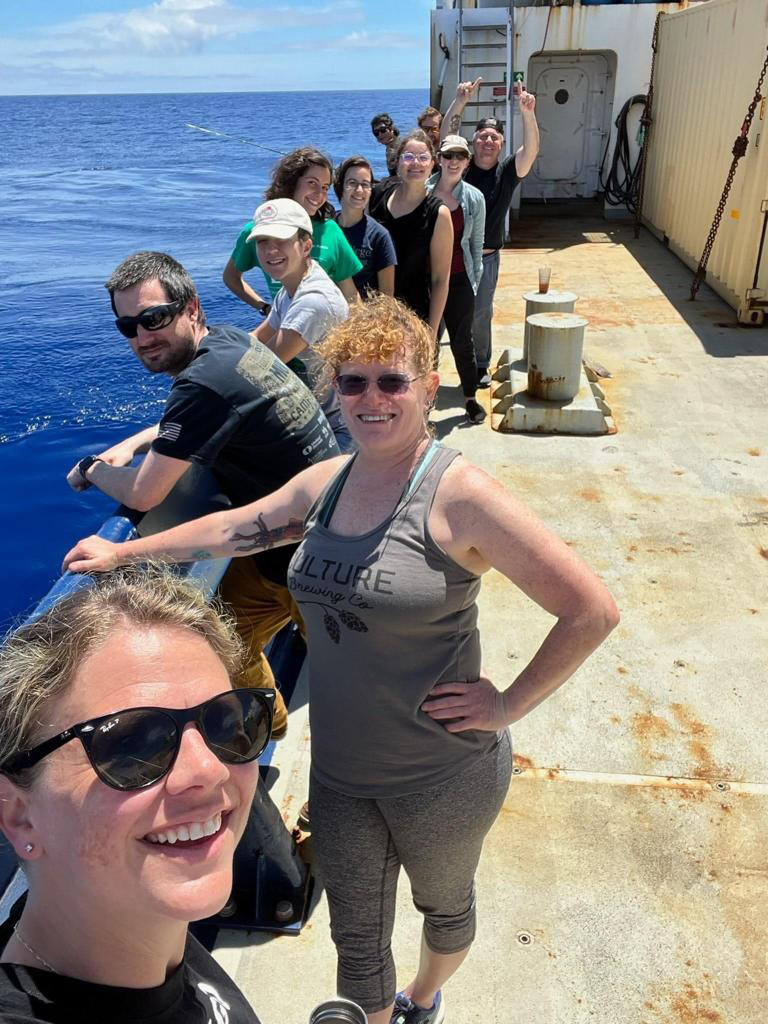