Each time a float is deployed, every effort is made to sample the water at the same location in order to calibrate and ground truth the data obtained by the floats. Our first deployment was during transit and before any planned ship stations, so we had to deploy without taking water samples. At our second deployment (Project Smiley), a CTD sampling rosette was sent down to 1500m, so we were able to collect the data and water samples needed.
The CTD (which stands for Conductivity, Temperature, and Depth) is a combination of sensors that measure different properties plus Niskin bottles that collect water samples at different depths. As the CTD rosette is lowered through the water column, the sensors collect data on a variety of components, such as temperature, salinity, depth, fluorescence, and oxygen. As it descends, the Niskin bottles are kept open like tubes that the water can flow through. The team watches the incoming data on a large computer screen in the control room, noting specific features that they would like to sample. Then, on the way back up to the surface, each one of the 24 bottles is “fired” at a particular depth: the bottle is triggered to close at top and bottom, capturing the water from that depth.
Once the rosette is back on deck, each team is assigned certain bottles from which they can draw the water for whatever they may be studying. I was assigned a bottle (Number 16), from a depth of 75m, and bottle (Number 22), from the surface. I would be preparing the samples for HPLC (High Performance Liquid Chromatography). 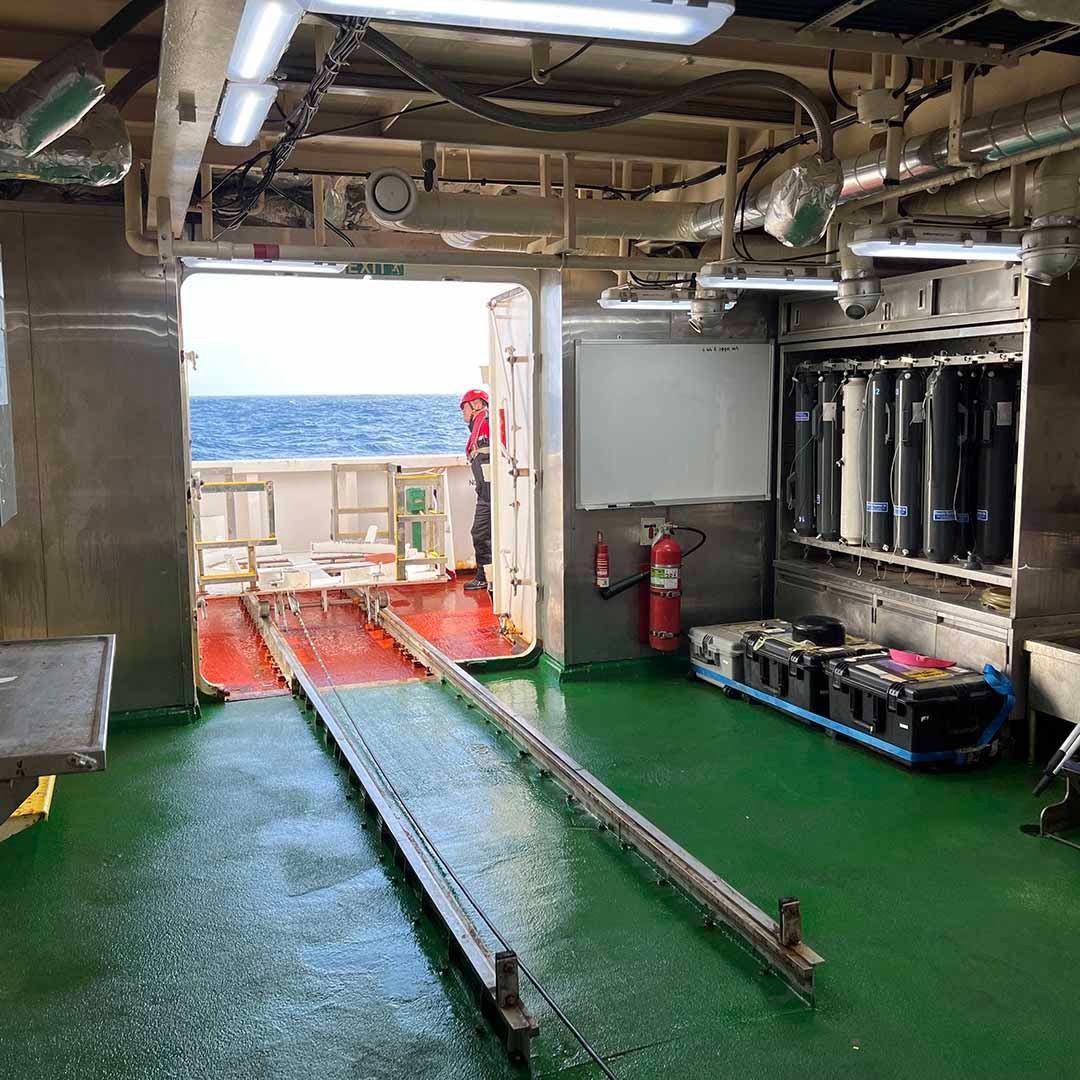 The CTD room awaits the arrival of the CTD rosette. Photo by Jenn Magnusson. 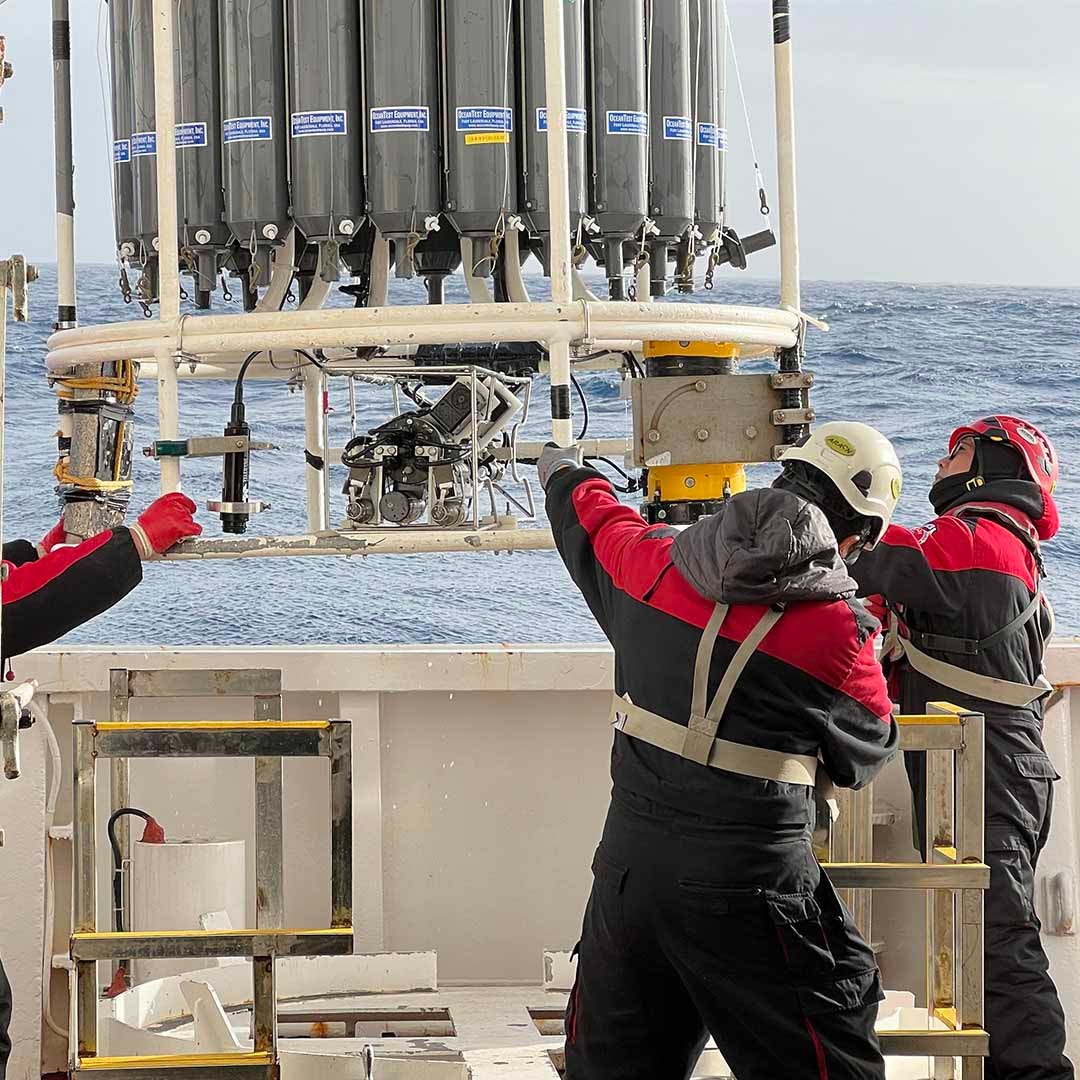 The crew pulls the CTD safely back on deck after its trip down to 1500m. Photo by Jenn Magnusson. 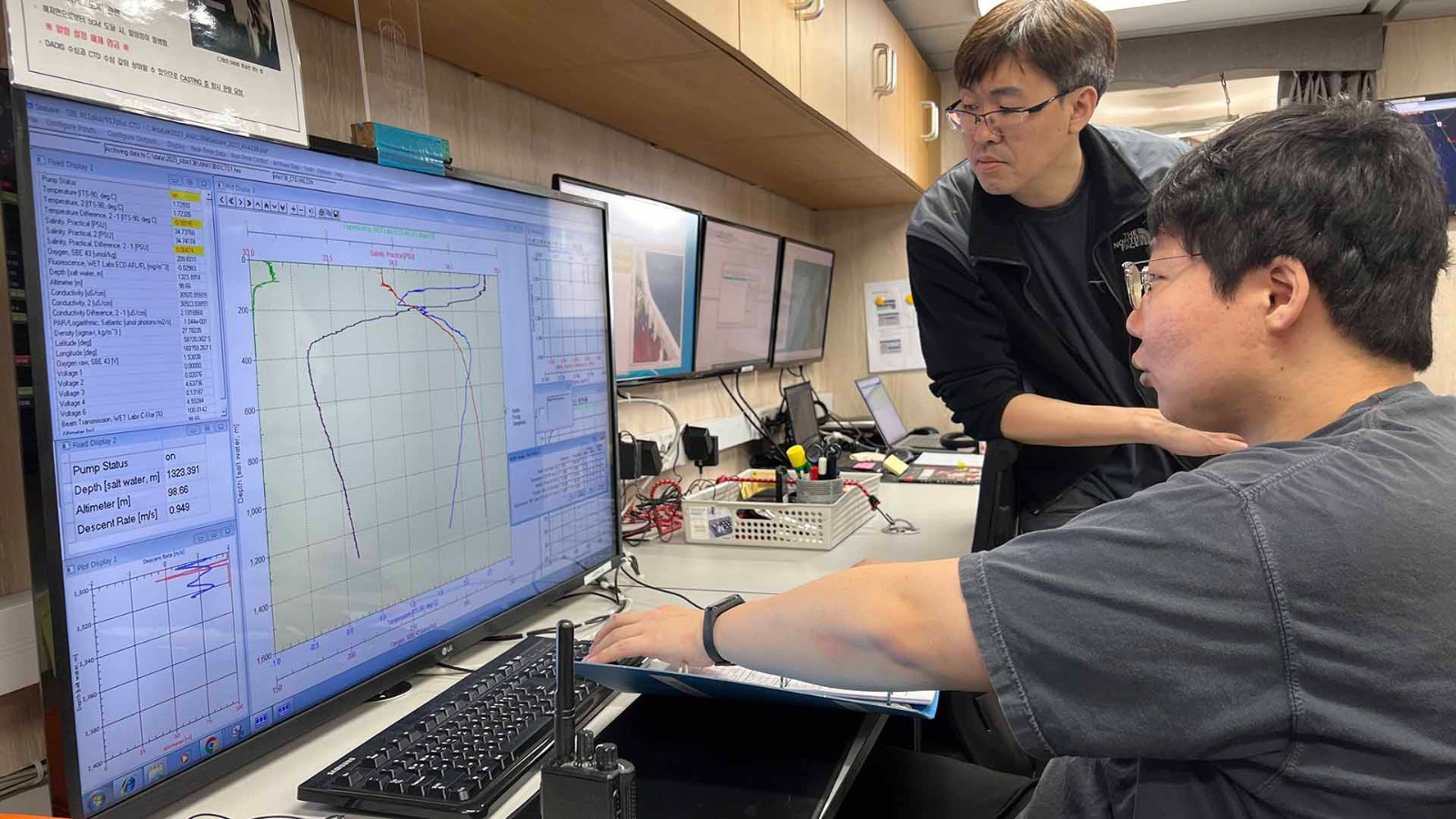 This was our first CTD cast of the expedition…everyone was excited for its return. Photo by Jenn Magnusson.

HPLC—High Performance Liquid Chromatography
As part of the collaboration between KOPRI and SOCCOM/GO-BGC, much of the data collected during the CTD casts will be shared with the float team. The only sampling that I had to do separately was for HPLC, which stands for High Performance Liquid Chromatography and is a way that researchers can separate, identify, and quantify each component in the water. I would need to follow the sampling protocol determined by NASA in order for this data to be used in their database. I learned as much as I could from the training manual the team sent, but I was also lucky to find support in the lab to help me process my first batch of samples! The water samples need to be carefully filtered and then stored at -80°C until they can be shipped back to the lab for processing.

And if you are interested in finding out the current ship position, you can check it out here. 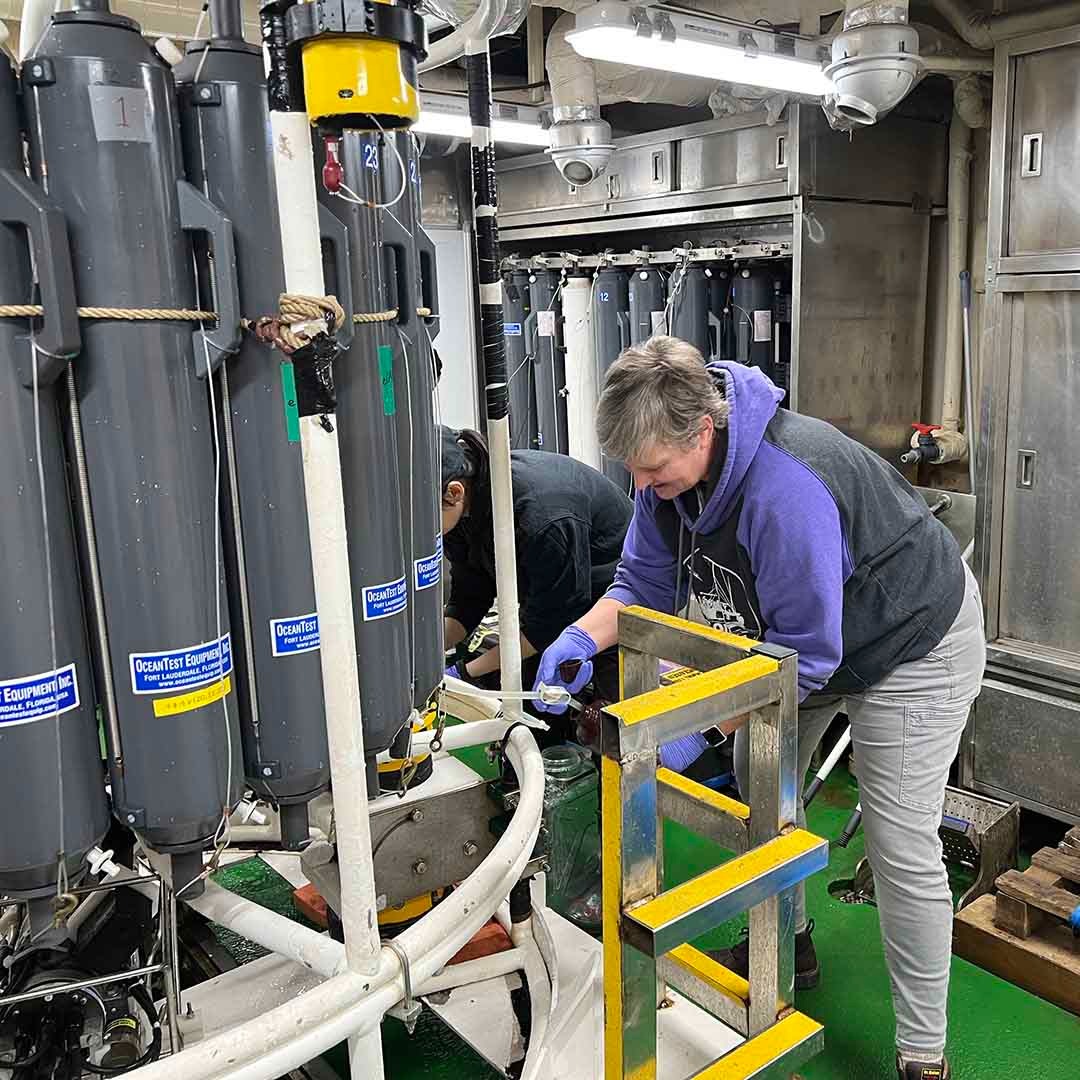 Collecting my first water sample from the Niskin bottle. Photo by Jenn Magnusson. 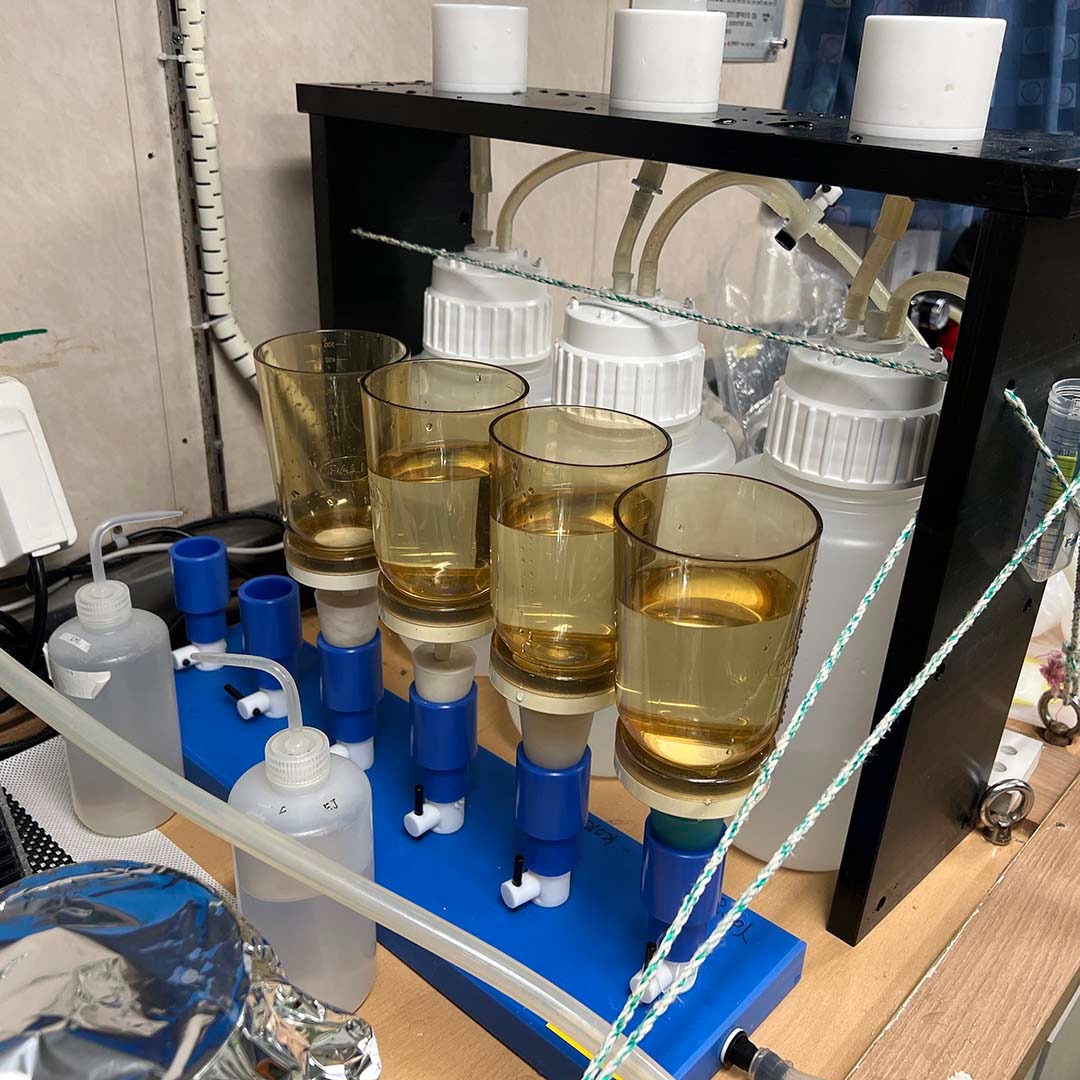 Vacuum filtration concentrates the pigments in the water sample! Photo by Jenn Magnusson.